Budweiser is infamously known as “the king of beers”. A flavourful and crisp American-style lager brewed with the same quality standard as in the late 1800s.

Budweiser, dubbed "The King of Beers," was initially produced in 1876 by Adolphus Busch and is brewed to the same high standards today. Budweiser is a delicious, crisp American-style lager with a medium body. It is a symbol of basic American ideals like optimism and celebration, brewed with the best barley malt and a combination of premium hop varietals.

A peek into the most iconic beer cans of all times - few beers are quintessentially “american” as Budweiser. Also it has one of the most long-standing packaging and labelling designs with not much changes even after more than a century. Budweiser began canning in 1936, after the end of prohibition to refresh the brand’s image . Before this, it was only available in kegs, 12oz and quart bottles. The canned version features a modern bow tie look and holds only 11.3oz of beer.

The Eagles on the Can

Along with the red,white and blue colours that speak American-style beer, the golden eagles on the can give off a sense of American patriotism.

The budweiser cans and packaging today, only reads “Genuine”. But this is actually shortened from the original label of “ Only Genuine as Decreed By the Courts”

Notes of malt, hops and traces of citrus and fruity notes

Crisp and clean taste, with a wonderful finish

Reviews 1
Write Your Own Review 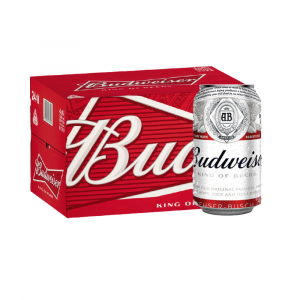